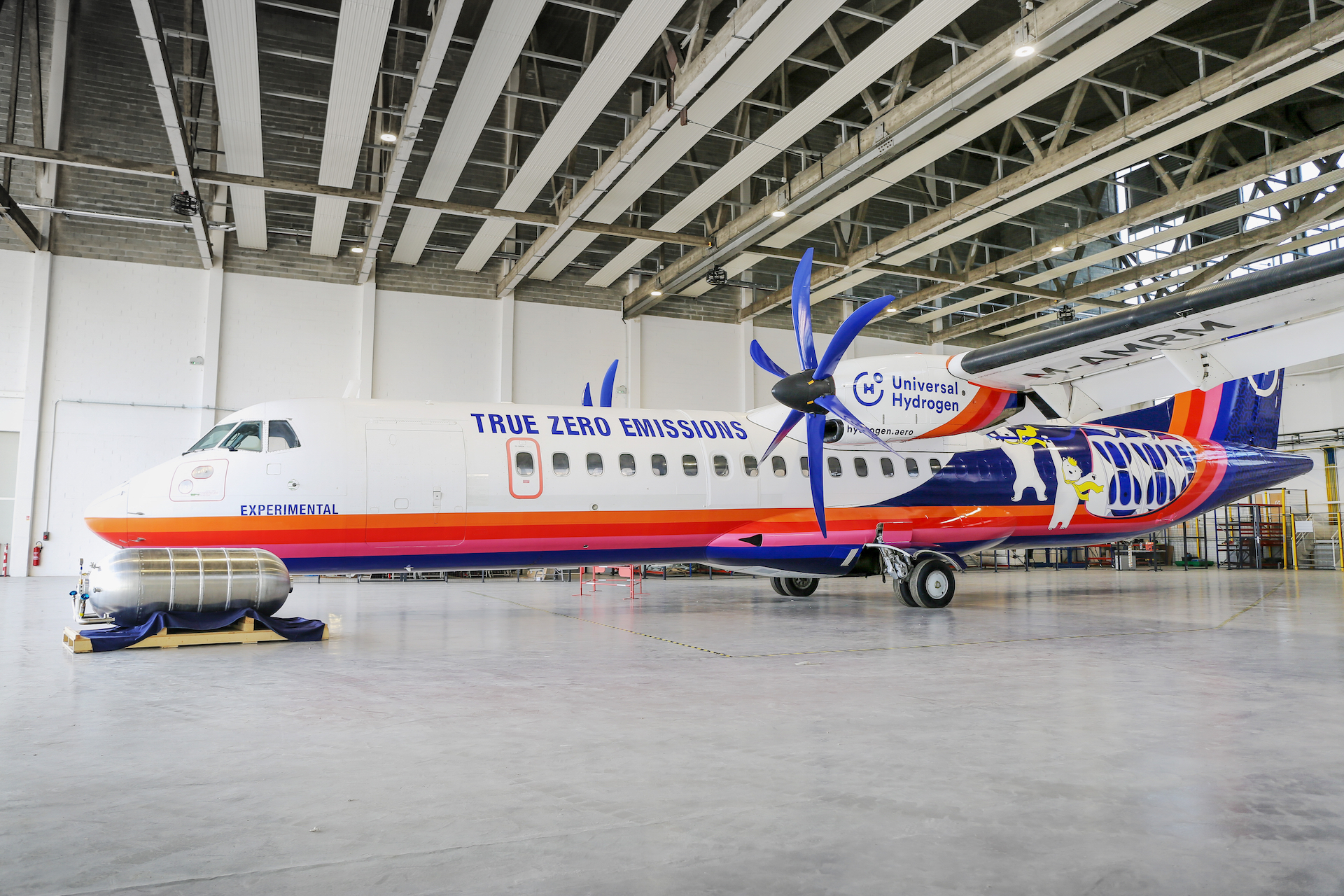 The three companies will combine their respective expertise in flight operations, hydrogen fuel production, and hydrogen logistics and aircraft propulsion to bring into service hydrogen-powered ATR 72-600 regional aircraft on DAT routes in Denmark, with the goal of converting all of DAT’s domestic flights to true zero emission flights by 2030.

“The domestic flight of the future in Denmark can become 100% emission-free via hydrogen-powered aircraft,” said DAT director Jesper Rungholm. “Universal Hydrogen is in the advanced stages of developing a modification for our regional aircraft type, the ATR 72, making this possible as early as 2025. It will be perfectly suited to typical flight distances in Denmark, and we are sure that customers will value flights that only emit clean water.”

Everfuel, an energy production and distribution company based in Herning, Denmark, will produce the green hydrogen for the partnership using renewable energy at its first power-to-X (PtX) plant in Fredericia.

“At Everfuel, we are excited about the new collaboration, as our entire mission is to achieve a fossil-free society,” said Everfuel CEO Jacob Krogsgaard. “This applies particularly to the airline industry, which must take action now if we are to avoid exacerbating the climate crisis. The new consortium can deliver the whole package, where our role is to deliver the green hydrogen. Then our partners use the hydrogen in the planes, as hydrogen-based planes are the best use of resources if we are to achieve emission-free domestic flights.”

The collaborative effort between the three companies follows the Government of Denmark’s request for tender, also announced today, to develop zero-emission commercial flights in Denmark.

“Collectively, DAT, Everfuel, and Universal Hydrogen possess the expertise needed to achieve Denmark’s ambitious target of achieving not just net zero but true zero emissions commercial flight as early as 2025,” said Paul Eremenko, co-founder and CEO of Universal Hydrogen. “DAT’s domestic network is a perfect early application for hydrogen fuel, and with the support of Everfuel, we can rapidly develop a complete hydrogen ecosystem in Denmark to usher in a new golden age of aviation built on clean flight.”

DAT is a Danish airline founded in 1989 by Kirsten and Jesper Rungholm. DAT, formerly Danish Air Transport, started as a freight carrier 33 years ago, operating with a single twin-engine Shorts Skyvan that flew with everything from mail and packages to racehorses. Today, DAT transports nearly one million passengers annually in a fleet of 20 ATR and Airbus A320 aircraft on regional routes in Denmark, Norway, Italy, and Germany. DAT also offers ad hoc charter services and operates ACMI contracts worldwide out of its five main bases.

Everfuel is making green hydrogen for zero-emission mobility commercially available across Europe, offering competitive all-inclusive hydrogen supply- and fueling solutions. We own and operate green hydrogen infrastructure and partner with vehicle OEMs to connect the entire hydrogen value chain and seamlessly provide hydrogen fuel to enterprise customers under long-term contracts. Green hydrogen is a 100% clean fuel made from renewable energy and key to electrification of the transportation sector in Europe and a sustainable future. We are a young, ambitious company, headquartered in Herning, Denmark, with activities in Norway, Denmark, Sweden, The Netherlands, Germany, and Belgium, and a plan to grow across Europe. Everfuel is listed on Euronext Growth in Oslo under EFUEL.

Universal Hydrogen is building a hydrogen logistics network to fuel the future of aviation today. Hydrogen is the ideal fuel for flight and will power aviation’s new golden age, where planes are powered by renewables and emit nothing but water. The company’s modular hydrogen capsules move over the existing freight network from production directly to the airplane anywhere in the world. Universal Hydrogen is also working to certify a powertrain conversion kit to retrofit existing regional aircraft to fly on hydrogen. The company has gathered the world’s leading aviation and hydrogen talent to give the industry the option of clean flight forever. Universal Hydrogen has engineering centers in Los Angeles and Toulouse and operating entities in Denmark and Canada.